{% set headerFontFamily = "Montserrat" %} /* This affects only headers on the site. Add the font family you wish to use. You may need to import it above. */

After you have updated your stylesheet, make sure you turn this module off

Surgery is a highly physical activity with surgeons often having to maintain ergonomically undesirable positions and postures for extended periods of time. While surgeons focus on creating the best outcomes for their patients, they are often putting themselves at risk of jeopardizing their own health and wellbeing. The attitude of the surgical profession has traditionally been one of “grin and bear it” putting aside physical pain and toughing it out. This has been the culture that most surgeons trained in and until relatively recently minimal attention was paid to the ergonomics of the surgeon in the act of performing surgical procedures. 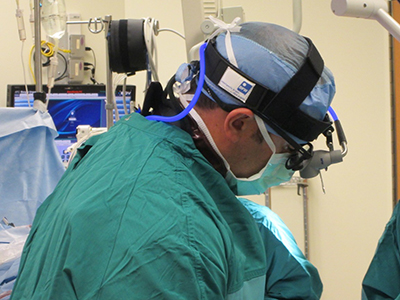 “As I have gotten older and matured in my sense of self, I have realized that this mentality is contributing to my own physical pain and discomfort. Physical pain for any human being can result in decreased mental acuity, fatigue, and distraction. Surgeons are no exception!”

Medical professionals stay informed of the latest data on treatments and techniques that can help provide the best outcome for their patients. In that spirit here are some datapoints to illustrate the potential harm that surgeons can do to themselves while operating.

In 2017 a study published in the Journal of the American College of Surgeons found that 90% of 127 surgical oncologists surveyed experienced at least one symptom of ergonomic injury, while 28% reported an ergonomic injury or chronic condition.

A meta-analysis of medical journal articles that evaluated musculoskeletal symptoms and ergonomic outcomes in surgeons was published in the Annals of Medicine and Surgery in March, 2018. The authors found that 60% of surgeons performing open surgeries reported generalized pain including back and neck pain (Figure 1). 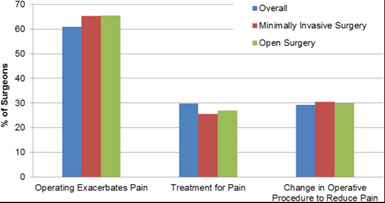 The authors of the article “Ergonomics in Surgery: A Review” published in the September 2017 edition of the Journal of Pelvic Medicine and Surgery, found that while work-related musculoskeletal disorders (WMSDs) are prevalent among surgeons, WMSDs have received little attention owing to under-reporting of injury and logistical constraints of studying surgical ergonomics. The study found rates of WMSDs ranging from 66% to 94% for open surgery with risk factors for injury including the use of loupes, headlamps, and microscopes. 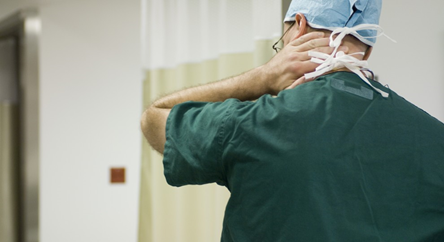 Increasing awareness among surgeons regarding the importance of ergonomics in the OR is leading more of these professionals to ask what they can do to reduce their pain, avoid injury, and increase the longevity of their careers while possibly contributing to better outcomes for patients. The truth is that despite the bravado, a surgeon experiencing significant pain can also experience mental distraction that could at the very least cause delays during a procedure and at the worse negatively impact surgical outcomes.

As one of their conclusions the authors of “Ergonomics in Surgery: A Review” stated that “future research must aim to develop objective surgical ergonomics instruments and guidelines and to correlate ergonomics assessments with pain and tissue-level damage in surgeons with WMSDs.” We could not agree more with this statement both for the sake of the surgeons themselves and for the benefit of society.

Initiatives in Ergonomics for Surgeons

In 2017 Duke University took the bold step of introducing a formal peer based ergonomic training program that uses 5th year General Surgery residents to mentor junior residents in practicing proper posture in the OR. Instructing these future surgeons in how to better take care of themselves while also taking care of their patients is a huge step in the right direction towards reducing WMSDs, elongating careers, and thus increasing the pool of practicing surgeons to the benefit of societal wellbeing.

The FDA has also been running with the ergonomics ball in their own way with Human Factors guidance and requirements for the development of medical devices. While primarily focused on safety and effectiveness, their guidance also encourages the designer of the surgical device to take into account the stress and strain placed on the user. Other beneficial initiatives that are gaining in popularity include using the Alexander Technique for improving posture and implementing “microbreaks” with stretching exercises to combat fatigue during long surgeries.

These initiatives and many others are helping to address the serious ergonomic issues faced by those who spend their time hunched over the OR table striving to produce the best outcome possible for the patients in their care. 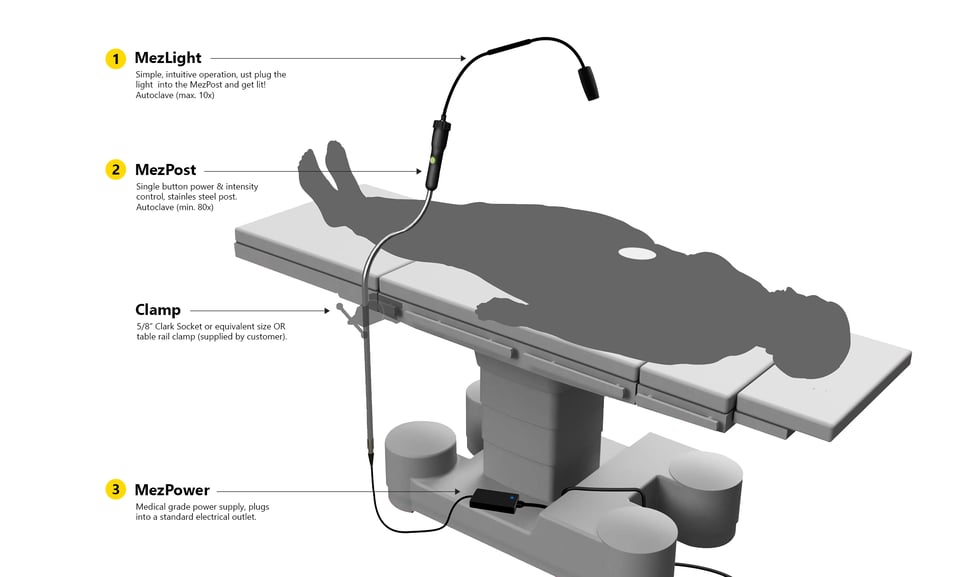 An Alternative to the Headlight

The MezLight was created by Josh Mezrich a transplant surgeon because wearing a headlight was literally a pain in his neck. Using a MezLight removes this physical burden by attaching the light source to the OR table rail instead of the surgeon’s head. The MezLight is also sterile which means you can manipulate it without using a towel or asking for assistance from others keeping you in control of your lighting. It is our hope that Josh’s invention will give surgeons a pain-free alternative to the headlight while at the same time allowing them more freedom and control while performing surgery.

“I don’t want to change how you operate; I want to help you operate better”